END_OF_DOCUMENT_TOKEN_TO_BE_REPLACED

Buy Timber Stocks and Watch Your Money Grow on Trees

But if that's the case, then you've been missing out.

Timber is a long-term investment that can reward your portfolio in good times, and protect it in bad.

In fact, investing in timber has proven to be more profitable - and less risky - than any other asset class for almost 100 years. Investing in timber stacks up well against stocks, bonds, oil and other commodities-even gold.

Timber beats stocks and bonds. Managed timber has actually beaten the stock market - with less risk - over the long run. From 1987-2010, managed timber returned roughly 14% annually, according to The Campbell Group, a timber investment advisor. Meanwhile, the Standard & Poor's 500 Index returned about 9% and bonds clocked in at a little less than 7%. Even better, the returns on timber have been less volatile.

Timber is uncorrelated to stocks and bonds. The Timberland Index maintained by the National Council of Real Estate Investment Fiduciaries (NCREIF) shows timber price movements have a very low correlation with other asset classes.

Timber whips inflation. Timber prices have grown at a rate that is approximately 3% greater than inflation for the last century. During America's last major inflationary period - from 1973 to 1981, when inflation averaged 9.2% - timberland values increased by an average of 22% per year, according to Money Morning timber investing research.

Timber Stocks: Real Growth You Can Count On

And while timberlands function like low cost warehouses, they also serve as profit-spinning factories.

Most timber-grade trees grow an average of 8% per year - which means that every year you don't cut them down, they're worth about 8% more. So while the stock market gyrates, timber keeps growing "on the stump" and increasing in value - year after year.

That's real growth you can count on. And while we can't say for sure what will happen with the world economy, we can safely say that trees will keep growing, and timber will be in demand.

In fact, the United Nations' Food and Agricultural Organization forecasts that world demand for woodwill nearly double by the middle of this century. Even paper recycling efforts have had little effect on demand.

And when it comes to being "green," trees are hard to beat. 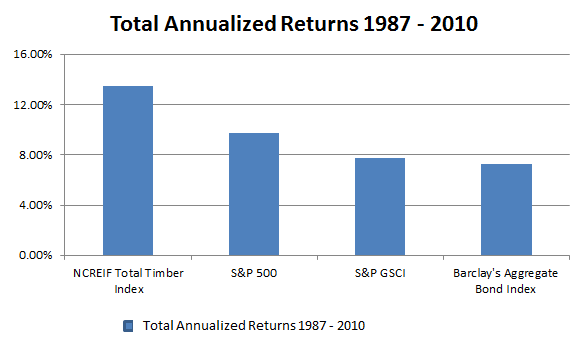 As metals and plastics are spewed out by smoke belching factories, wood is adding to the oxygen we breathe. Timber is renewable, recyclable, biodegradable, and produced with clean solar energy. As "green" awareness increases around the globe, timber becomes more attractive than ever.

All of this makes investing in timber stocks a great capital growth vehicle - and a reducer of risk.