END_OF_DOCUMENT_TOKEN_TO_BE_REPLACED

As an example of a success story, the report outlines the impacts of a joint study between CIFOR and CATIE in Honduras under the Tropical Forests and Climate Change Adaptation project (TroFCCA), which aimed to define climate impacts on tropical forests and the role of forests in facilitating adaptation. The study was cited in the successful application of Honduras to the Adaptation Fund.

The report notes that CIFOR was asked to contribute to several task forces on the implementation of the Norway/Indonesia "Letter of Intent," which will assist Indonesia in moving forward with REDD+ (reducing emissions from deforestation and forest degradation  in developing countries, as well as conservation, sustainable management of forests and enhancement of carbon stocks). It also notes that, while planting trees is a useful activity in Indonesia, it cannot create emission reductions at the scale required in the country. The report describes the decision of the Consultative Group on International Agricultural Research (CGIAR) to create a new thematic area on forests and trees and a CGIAR Research Program on Forests, Trees and Agroforestry.

Finally the annual report outlines the highlights of Forest Day 4, organized by CIFOR on behalf of the Collaborative Partnerships on Forests, on the sidelines of the 16th session of the Conference of the Parties (COP 16) to the UNFCCC in Cancun, Mexico, in December 2010. 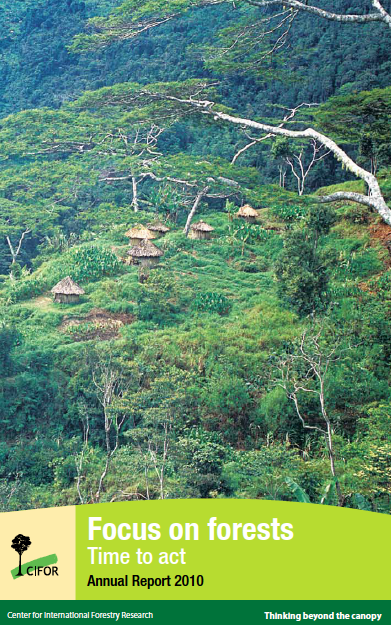