END_OF_DOCUMENT_TOKEN_TO_BE_REPLACED

Global demand for carbon credits, especially in Europe for economic reasons, has been declining since 2010.

With the prices sliding of Certified Emission Reduction (CER) certificates traded on the international exchange, Indian companies holding the credits are bracing for tough times. Brokers trading in CERs have started to downsize their carbon desk and the ones holding these are looking for buyers.

“The demand for CERs is low, which saw the prices slide. Aggregators of credits and the intermediaries, have started feeling the heat. Some have already reduced activity in India and some of the purely trading firms have already closed shop,” said Dipankar Ghosh, partner, Ernst & Young (climate change and sustainability advisory). 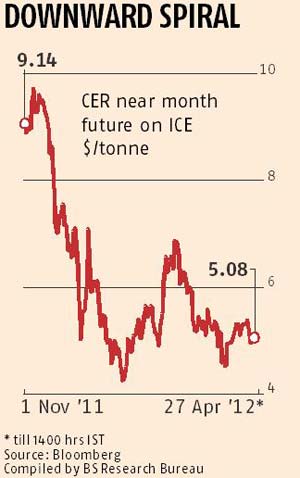 Greenhouse gas emissions are capped and markets are used to allocate the emissions among the group of regulated sources. The goal is to allow market mechanisms to drive industrial and commercial processes in the direction of low emissions or less carbon-intensive approaches than those used when there is no cost to emitting carbon dioxide and other GHGs into the atmosphere. Since GHG mitigation projects generate credits, this approach can be used to finance carbon reduction schemes between trading partners and around the world, goes the Protocol.

The Clean Development Mechanism (CDM) under the Protocol allows tradable credits to companies that set up environmentally friendlier projects. A consultant or a trader usually helps the manufacturer to sell the credits and in the process gets a share.

According to industry insiders, companies such as Noble, First Climate and Gensol Consultants have already reduced activity related to the carbon credit market. While Noble India and Gensol could not be spoken to, despite repeated attempts, First Climate confirmed all was not well in the Indian carbon trading market. Its associate director, Saurabh Jain, said: “We are not closing our carbon trading desk but it is true that we are not seeing any growth in the trading business. We are reducing our focus on the pure carbon credit trading business and will put more emphasis on renewals and climate change projects.”

After the climate change conference talks at Durban last December, Indian industry hopes it would gain from an extension of the Kyoto Protocol, otherwise scheduled to ned in 2012. But, prices of carbon credits, once at ¤17, started a downward slide from last year and settled at ¤5.08 in April 2012. Major public sector units such as SAIL, ONGC and even Delhi Metro own CERs. In the private sector, Reliance Industries and ITC are among those holding CERs.

As of November 2011, India had 2,123 approved CDM projects. Of these, 738 were registered with the United Nations Framework Convention on Climate Change, according to data by Ficci, the business chamber.

According to Seema Arora, executive director, CII-ITC Centre of Excellence for Sustainability Development: “Many Indian companies had sold their carbon credits before the Durban talks. However, post Durban, European buyers are not honouring their commitments, citing recession and financial crisis.”

Companies such as KPMG, which offer advisory and consultancy services to companies on their climate change and sustainability initiatives, saw their ‘success fee’ (or the advisory charges paid on the success of CER trading) come down.

"The CDM market is not looking promising right now. There is a mismatch in the demand and supply. The demand for CERs has come down for a variety of reasons, including recession in Europe (which was a major buyer of the credits). There was an initial rush for registering projects under the CDM executive board to get carbon credits. But from 2010, the number of projects have come down by 75 per cent," said Arvind Sharma, head (climate change and sustainability services practice), KPMG India.