END_OF_DOCUMENT_TOKEN_TO_BE_REPLACED

Pulpwood plantations in Brazil: the key to the future

SAO PAULO, Nov. 2, 2009 (RISI) - I've written a lot lately about the surge in biomass energy plantation investment in Brazil, but there has also been a strong expansion in eucalyptus pulpwood plantations in recent years. This expansion in plantations for pulpwood production is a key indicator of future expansion plans for the Brazilian pulp sector, and offers some interesting new opportunities for timberland investors. So I'm looking forward to RISI's upcoming Latin America Pulp and Paper Outlook Conference in Sao Paulo November 15-17 (http://www.risi.com/la_conf/), where I'll have a chance to chat with pulp producers from Brazil (and Mexico, Colombia, Argentina, etc.) about what's happening in their rapidly developing plantation programs.

The best indicator of future pulp production in Brazil may be the annual planting of eucalyptus by the pulp and paper companies that are members of BRACELPA. The industry is mostly on a six-year rotation, so the 133,000 ha planted in 2002, along with other coppiced plantations and perhaps 20% supply from third parties, supported the 10+ million tonnes of hardwood pulp produced in Brazil in 2008. But annual planting (including replants) by the Brazilian pulp companies surged to nearly 200,000 ha in 2005 and then to almost 300,000 ha in 2006 and 2007. This indicates anticipation of a strong expansion in production of eucalyptus pulp in Brazil by 2012-2013. There may be market-related or financial reasons why some of the planned pulp projects in Brazil are delayed over the next five years, but one factor will NOT be a problem: lack of wood fiber. The trees are already in the ground, and growing a lot faster than they did in previous rotations. According to BRACELPA, the average productivity of eucalyptus pulpwood plantations in Brazil has increased from 24 m3/ha/yr in 1980 to 41 m3/ha/yr in 2008, with the potential to go to 70 m3/ha/yr. 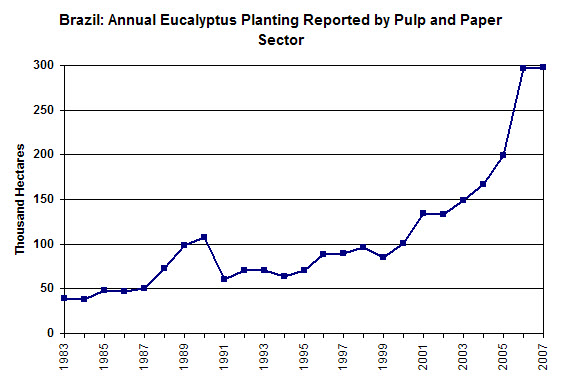 Brazilian pulp producers have been expanding to new regions recently, for example Suzano is developing a plantation base of 250,000 ha in the states of Piauí and Tocantins in northeast Brazil. In Mato Grosso do Sul, there is a major expansion of the Votorantim plantations, but two other pulp producers are also establishing plantations which could support future mills. In addition to expanding their own plantations, Brazilian pulp companies are looking to strengthen their ties with third parties who are willing to invest in new plantations to support future pulp projects. For example, Klabin formed a partnership with The Forest Company, a UK-based investment fund, to plant new lands close to Klabin's operation in Telemaco Borba in Parana state. To date, The Forest Company has committed US$20 million to this, targeting a planted area of 2,500 ha. (Timber Capital is the asset manager for The Forest Company.) Other Brazilian pulp companies have spoken to me about their interest in similar partnerships in different parts of Brazil, with some companies aiming to have 30% of their plantation base established by third parties.

And in addition to the traditional pulp producers, some new players are trying to enter the pulpwood plantation space. Claritas Investments Ltd., a Sao Paulo-based firm with $850 million in assets under management, has several investment funds in the forestry sector, including Eco Brasil Florestas. This fund is a JV with the former owners of a large pulp and paper company in Brazil, which is targeting establishment of an industrial scale pulpwood plantation in a frontier region of northeast Brazil, with the ultimate objective of supporting a pulp mill. Another new player, GMR, has reportedly acquired over 150,000 ha in the state of Tocantins, where it intends to establish eucalyptus plantations for both the energy sector and yet another new pulp project.

Finally, although timberland investors have been somewhat disappointed that the South American pulp producers have not sold off their forest assets like North American pulp and paper companies have, some opportunities have been developing. This is partly the result of restructuring (e.g. the merger of Votorantim and Aracruz), and partly due to the surge in new planting offering possibilities for companies to consolidate land holdings in one area by disposing of or swapping assets in other areas. We understand that Aracruz may have already sold (or is selling) plantations established in Minas Gerais state which were intended for a future pulp cluster which Fibria will not be developing. Last week, Celulose Irani sold 3,285 ha of pine plantations in Santa Catarina state to a US-based TIMO. Other plantation sales are reportedly "in the works", so it looks like a great time to gather at RISI's conference in Sao Paulo to get the latest industry perspectives.