END_OF_DOCUMENT_TOKEN_TO_BE_REPLACED

Back in January, a group from the Woods Hole Research Center in Massachusetts deployed a pantropical forest carbon map to estimate emissions from global deforestation and land use at 8.1 gigatonnes of carbon dioxide (2.2 petagrams of carbon) per year from 2000 to 2010 (Nature Climate Change). Five months later, a team led by scientists at the consulting firm Winrock International, based in Arlington, Virginia, estimated emissions at less than half of that level from 2000-2005 (Science). 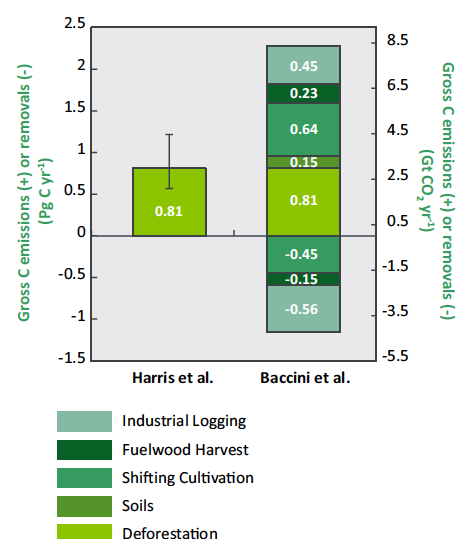 General confusion ensued, but now, following a meeting of the minds and a sorting out of definitional issues, both groups have come together on a consensus statement, of sorts. The new estimate of 3 gigatonnes annually (.81 petagrams of carbon) for the years 2000-2005, released this week at the United Nations climate talks in Doha, Qatar, aligns with the Winrock estimate while explaining the reasons for the apparent discrepancy: The Winrock group tracked gross deforestation only while the Woods Hole team included factors such as emissions from soils and widespread forest degradation.

The results are more complicated than they might first appear. Indeed, as far as the emissions go, the agreement on the bottom-line number is in part coincidental. The teams’ estimates were similar in South America, which is not surprising given that Brazil is responsible for most of the deforestation and has solid satellite data to document it. But in Southeast Asia and Africa, the two groups reached different-but-offsetting conclusions, with estimates varying by more than a factor of 2.

“We have similar estimates for the whole tropics, but we don’t necessarily put the sources in the same places,” says Richard Houghton, who headed the Woods Hole crew.

Both groups developed and used maps in order to estimate emissions based on the amount of carbon locked up in any given hectare of forest, but the emissions estimates were very different. The Winrock team based their emissions estimates on deforestation picked up in satellite data whereas the Woods Hole group based the overall level of deforestation (and degradation) on national data provided by the UN Food and Agriculture Organization, overlaid onto the carbon map. Scientists have been struggling for years with the FAO data, which is based on national reporting and thus inconsistent, to the point that Sandra Brown of Winrock says scientists would be wise to abandon the FAO data altogether. The trick, Houghton says, is bringing the satellite analysis to a level of detail that includes things like smaller clear cuts and logging operations – things that are covered in the FAO data.

But this divergence is also misleading. The Woods Hole team analyzed their forest carbon map using the same deforestation data processed by Winrock, and in that case the numbers aligned fairly well in Africa and Southeast Asia as well. In other words, both teams came to similar conclusions when it comes to the underlying remote-sensing data on forest carbon. But countries still need to get a better handle on deforestation and degradation, as Brazil is attempting to do.

Dan Zarin, programme director at the Climate and Land Use Alliance, based in San Francisco, wrote a perspective in Science accompanying the Winrock paper and helped bring the two groups together (including by funding the analysis, in partnership with Norwegian government’s International Climate and Forest Initiative). The new estimate for global emissions is at first glance lower than previous numbers, but precisely because it does not include emissions from things like soils, degradation and peatlands (once these extra emissions are folded in, the number appears to be within the range of prior estimates). In the end, Zarin says policymakers now have the information they need to set a global baseline as well as formalize targets, such as the European Union goal of curbing deforestation by 50 percent by 2020.

It’s not yet clear what political impact this report might have, but early indications out of Doha are not promising as far as the forest talks go: the Center for International Forestry Research in Bogor, Indonesia, reports that the talks have stumbled over details of how to set up such a system. But negotiators still have a few days to push things forward; more on that as the negotiations wrap up at the end of the week.