END_OF_DOCUMENT_TOKEN_TO_BE_REPLACED

New NASA research shows a sharp decline in the amount of smoke over the Amazon during the 2008 burning season, coinciding with a drop in deforestation reported last week by Carlos Minc, Brazil's Environment Minister.

Analyzing the aerosol concentrations over the Amazon each September from the past four burning seasons using the Ozone Monitoring Instrument on NASA's Aura satellite, atmospheric scientist Omar Torres of Hampton University and several colleagues found a dramatic decline in airborne particular matter in 2008, indicating reduced incidence of fire in the region. Fire in the Amazon is primarily used by humans for land-clearing to establish cattle pasture, which now accounts for the vast majority of 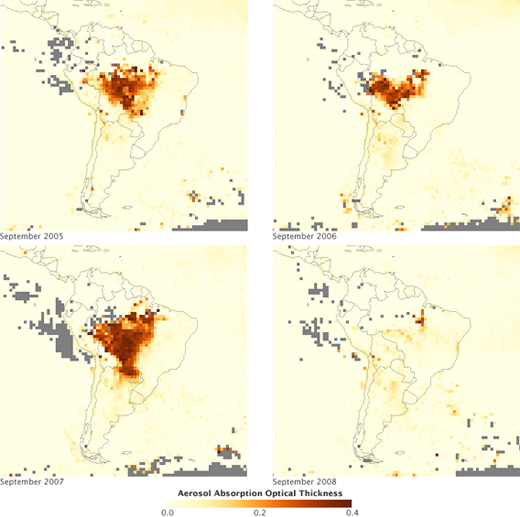 This series of images from their analysis shows aerosols (particles in the air) over the Amazon each September from the past 4 burning seasons (2005 through 2008). The observations were made by the Ozone Monitoring Instrument (OMI) on NASA’s Aura satellite. The aerosol scale (yellow to dark reddish-brown) indicates the relative amount of particles that absorb sunlight. (In scientific terms, the image shows aerosol absorption optical depth, which is a measure of how much the smoke particles are absorbing and attenuating incoming sunlight.)

Deforestation in the Brazilian Amazon is increasingly driven by industrial development rather than subsistence activities. Today the region is a major source of beef and soy production and, accordingly, forest clearing has lately tracked market trends, notably commodity prices. For example, when commodity markets reached new heights in 2007 and 2008, landowners, facilitated by easy credit, continued chopping down forests in preparation for the 2008 burning season (following a record 2007 burning season). But their efforts were interrupted by the global financial crisis which spurred banks to rein in lending and triggered a plunge in commodity prices. Developers abandoned forest conversion, leaving nearly 25,000 square kilometers of Amazon "degraded", but not deforested, for the year. Fires fell dramatically for the 2008 burning season, leaving deforestation for the 2008-2009 year at the lowest level on record — below 10,000 square kilometers — according to Environment Minister Minc.

Link to Article: Origin of this text